NOTE: the readings referred to throughout this study are from John Steward’s book “From Genocide to Generosity.” It’s available in paperback and Kindle format from Amazon

Share how you feel free and safe to speak in this group and be supported by it.

What response did I make to the question at the end of session 4: how I responded to one bad feeling?

What changed in me so I could rise up the curve?

What has happened in me since then and how have I changed?

On page 17, Professor Simon talks about one stage of his workshop where Rwandans ‘analyse their feelings, understand them and decide to manage them. They learn a lot about themselves and their parents. They discover models of relating and communicating, which show respect towards others: partner, child, friend, enemy or stranger.’ This is our focus in this session.

Share what I learned about feelings from my parents, siblings or other significant people in my life. What did they say? What was the tone of their words?

Read aloud these words about feelings from some of the storytellers:-

Makoriko was dominated by fear (page 70). As mother, stepmother and adopting mother she modelled this fear to 11 children, all living under the same roof.

Sabamungu was quarrelsome and bitter (page 73) and his nieces were frightened of him, while he was a stern father to his children.

Nsabiyera hated and was revengeful (page 80). His energy was consumed by inner unrest and pain. He was modelling this behaviour to his children.

Mama Deborah could not trust anyone (page 86) and had no one to confide in. Her children could see her isolation, loneliness and struggle..

Karigirwa commented, after she became self-aware: “with regard to my emotions when I was abusive towards others I was also suffering myself.” (page 40).

John was educated to believe: “you can’t trust your feelings” and “strong feelings can damage relationships” (page xiv)

One approach used in Rwanda was developed in the 1960’s by Eric Berne. Called Transactional Analysis it suggests that our communication involves behaviour that reflects the natural feelings within us as a child, as well as the feelings conveyed by messages we received from our parents or other influential adults. Our thoughts (preferences and choices) as adults constantly weigh up a combination of fresh thinking and the messages handed to us by others.

As part of changing my self-awareness I can re-consider my habits, choices and priorities and consider if I want to make a new choice (see page 26). On page 70, Makoriko says  ‘I saw that some emotions were very positive and others of them were negative. I was not to ignore the negative emotions but to work out the appropriate behaviour that would allow me to express those emotions without damaging other people.’

Karigirwa alerts us to the importance of this for communication on page 40: ‘I learned how to talk appropriately and to control my feelings – to acknowledge to whom I am speaking, their circumstances and never to say anything that could hurt another person…to speak in a manner called, ‘I am OK, you are OK.’

A story to introduce kinds of communication. It is an adaptation of a Middle Eastern story.

“The younger of two sons in a middle eastern family got tired of working on the family farm and decided to confront the boss with his plan to quit his job and to travel. In order to pay out his share of the estate the boss had to break normal tradition and mortgage one third of the farmland with its stock, implements and buildings. This was most embarrassing, as the community would laugh at the boss and think ‘anyone doing that is just losing their mind’.

But the young son was brash and did not care – he just wanted the money. And so he disappeared from the district and was not seen for a long time. The older brother kept running the farm but now had more work to manage – so you can imagine that he was not impressed. Remember, one third of all income was now needed to repay the loan (and reduce the mortgage). So at this stage the only winner was the deserter, far away and enjoying himself.

But, as happens to many of us, having a good time costs money and the tourist kid ran short of it. He got a job on a pig farm and was allowed to forage for food. At times he was so hungry that he was tempted to eat the scraps, which were meant for the pigs. He felt he was going crazy and his mind came up with a wild idea: ‘I’ll go back to the old farm and ask if I could be a day labourer.’ He reckoned that the work and food on the old farm was far better than what he had now.

When he was desperate enough he made the trip back. His sandal broke and his clothes were sweaty and smelly, but this did not stop him. He felt nervous as he limped towards his old work place, especially as he had to go through the village centre to get there. He knew he’d be recognised and would be jeered; they’d call out ‘blimey – what a failure’, ‘poor beggar’ and worse than that. He’d just keep his head down and put one foot in front of the other.

As he approached the edge of the village a noise suddenly came his way and he looked up. Blow me down – that was the old boss running towards him. The sad lad was confused at first: the boss’s brown hair was now grey, and to run in public was actually below the dignity of a local business leader who should’ve been riding a donkey. But the boss kept getting closer and, can you believe it, zoomed right up to him and, despite the smell, began to hug him. Behind the boss trailed a couple of staff and the boss shouted back at them, ‘it’s him, my child – go and get some water from the well, get some sandals ready, and clean clothes’.

People realised this was a good moment and they rushed out of their houses and started dancing and clapping. It was unreal – the sad and sorry lad was almost dragged along the path back to the farm and told to wash up and get dressed. The boss declared a ‘tools down’ afternoon and gave orders for a celebration party with fine food and wine. As they all said: ‘this son was dead and is alive again, he was lost and now we’ve got him back’.

Later that day when the boss looked around for the older brother, he was nowhere to be found. So they searched everywhere to find him and say ‘take a break, come and enjoy the party’. The older brother wasn’t having any of that. He ranted at the boss – ‘you are so stupid. This lad did what he could to ruin our business – and now you say it is great to have him back! Bunkum. What about me? – I work hard every day, I never waste a thing, and I never get given a party. There’s no way… I’m NOT celebrating this farce.’ The boss could do nothing but leave the loyal worker standing outside in the heat of the afternoon sun, red-faced in his own anger. The boss went sadly to continue the festivities.”

Who changed and how did they change? Did anyone not change? Why?

Group discussion: What is helpful for me in this explanation; what makes sense to me; what do I not yet understand well?

Learning by role-playing. Try these examples and identify the feelings that were being conveyed in the story. Then change to a more appropriate tone of voice. What is that like? What has changed?

The younger son wants to leave. One person be the son, the other is the boss at the start.

The boss sees the son coming: the boss and the son when they reunite.

The older son responding to the boss and refusing to come inside.

A parent helping a child who is unable to reach the door handle.

A teenager who does not like what the second person (a parent) is asking.

A parent who treats their partner as inferior.

Partners who relate respectfully over a difficult issue as persons of equal value and significance.

‘How I use my tongue will tell me of my unhealed pain, my unconfessed resentment, my unforgiven acts, my unwillingness to forgive, my inability to reconcile.By knowing myself in this practical way I become aware of where I am failing to live well; and that makes it hard for me to do well.’

Today’s session has been an invitation to use peaceful ways to speak. What is my challenge from today?

The preparation for the next session is to read the last paragraph on page 99, where Michael Lapsley speaks of  “seeking to break the chain whereby the [unhealed] victim becomes the perpetrator, by acknowledging the pain of the past and…to see the connection between their own mistreatment and their victimisation of others.”

An extra look at Steps 6 and 7 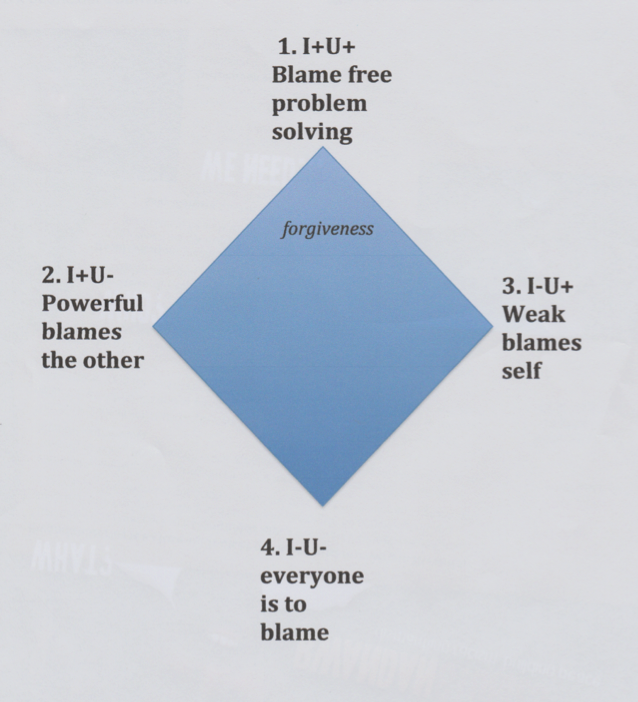 I+ U+  I am OK, you are OK. Welcome, open, receptive – a position of decision, without blame.

I- U+   I am not OK, you are OK. Submissive, contrite, surrender – blaming self.

– starts with giving the boss a message I wish you were dead: I+U-

– wastes his heritage, and realizes I am not OK. I am in a mess.

– regrets this and has a pragmatic repentance.

– when the younger one comes home, his attitude worsens. “Your son was wasteful”

– accepts the outrageous demand of the younger son

– breaks tradition and runs to meet him

– puts the best robe on the son and gives shoes etc.

– orders a feast, not an enquiry

– invites the older son to join them

– offers generosity to both the brothers

The Boss is always I+U+

The I+U+ is our goal in communicating – we make that choice and take our feelings into account in what and how we communicate. The voice, the face and the emotions all contribute to the body language.