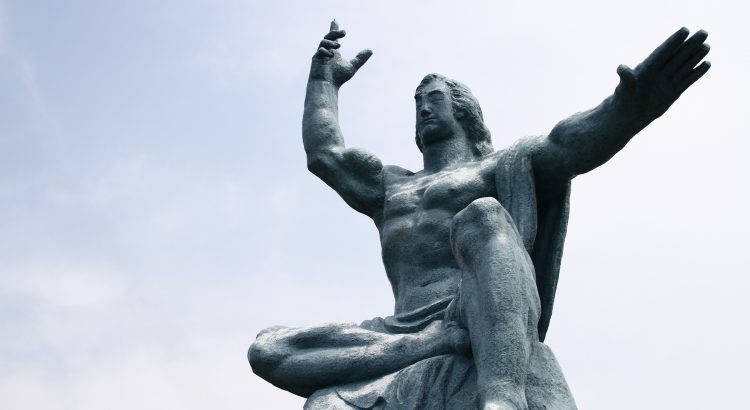 I will forever be grateful for the friend who sent me this book. It is one of the most influential books in my life, and I made more marks and underlining in it than in any other book I have ever read. Here I met one of the world’s great Peacemakers: Doctor Takashi Nagai (“The well that lasts”).

Nagai belonged to a Japanese medical family committed to the Shinto faith. However by the time he graduated from high school he was a convinced atheist. An avid reader, he studied at Nagasaki medical University, graduating in 1932. The scientific rationalism at university strengthened his unbelief. He was most annoyed by a sense of the crassness of ‘foreign gods’ being worshipped in the Cathedral at Urakami, a suburb of Nagasaki.

Nagai’s passion was science; he believed it held the key to every door that barred human progress.

He also loved Japanese poems from the seventh and eighth century CE. This helped keep him sensitive to the Japanese ideographs (symbols used in writing systems to represent concepts), which he read each day, and which kept him aware of the importance of feelings and intuition.

At high school Nagai had read in Pascal’s Pensees and pondered much his thought: “man is a thinking reed”. At university he came across Pascal as the inventor of the syringe and the barometer. So he continued to study the Pensees, aware that it was written by that rare combination of scientist and mystic.

Pascal challenged two false attitudes to reason, which hinder the discovery of truth: one – overconfidence in the rational, which can lead to scepticism; two – resignation to stupidity (naivety).

Nagai realised that higher truths are of wisdom and are received rather than grasped, seen “by the eyes of the heart”. He loved Pascal’s famous quote “the heart has reasons that reason knows nothing of”. But the greatest challenge to Nagai was, in Pascal’s words, “Faith is a gift of God… You must pray for it…”

Download a longer extract from A Song for Nagasaki